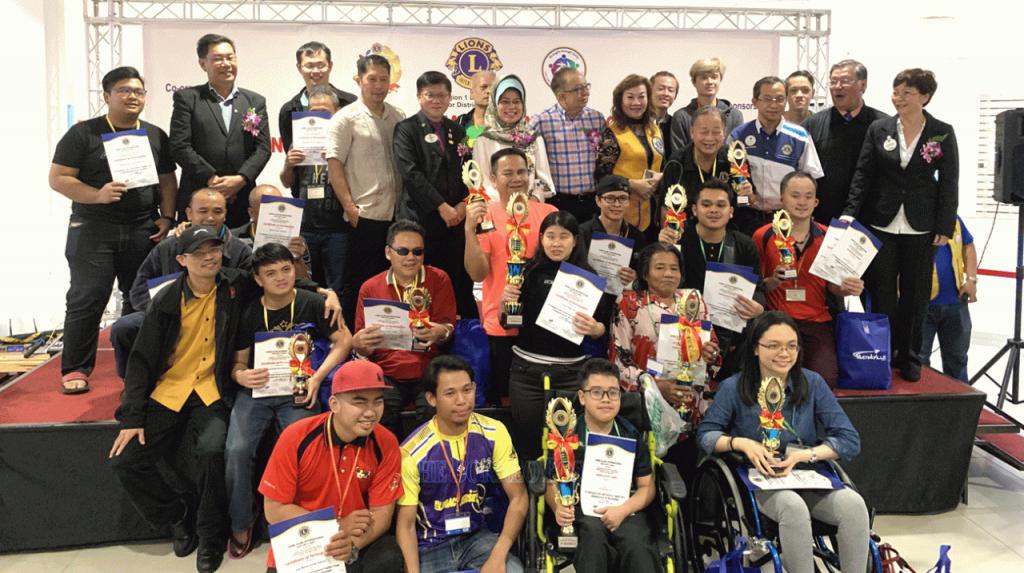 Fatimah (standing on stage, centre) joins the participants of the international English chess championship in a group photo

KUCHING: Maintaining patience and having deep focus on the game seemed to work very well for Termizi Yusuf, who emerged winner of the preliminary round of the 'Second Malaysia Lions International English Chess Championship for the Disabled', staged at Aeroville Mall here yesterday.

The 64-year-old told The Borneo Post here that it was a proud moment for him because this victory meant that he could represent Sarawak at the national-level meet, set to take place in Kuala Lumpur this March.

“I hope I could bring a win for Sarawak," said Termizi, who was placed fifth place in the national championship last year.

Termizi with his trophy and certificate of participation.

He said he first started playing chess during his 30s, using computers and smartphone apps.

“As an individual with special needs, it's hard to play other sports, but chess is good
because we can sit and think without using too much energy," he said.

In advising those wanting to learn playing chess, Termizi said one would need to have good time management and also, one must never be complacent.

“Never give up. Always work hard and don't be afraid of losing because losing is part and parcel of the game. To know your own abilities in chess, we must follow other competitions to test our limits."

Termizi is among 10 players qualified for the national championship.

The 'Second Malaysia Lions International English Chess Championship for the Disabled' was organised and run by the Lions Region One Club, which comprises 14 Lions clubs from Kuching, Serian and Kota Samarahan.

In her remarks, she lauded the Lions on the running of the championship, which she regarded as 'helping to empower the disabled community, and letting them feel included in society'.

“My ministry, alongside with the Education Ministry, strive to ensure that they are not left behind in terms of education and rehabilitation; we also try to empower them through sports, vocational skills, arts and cultural events.

“We would like to see the members of our disabled community have dignified lives and develop their potential to the maximum," she said.