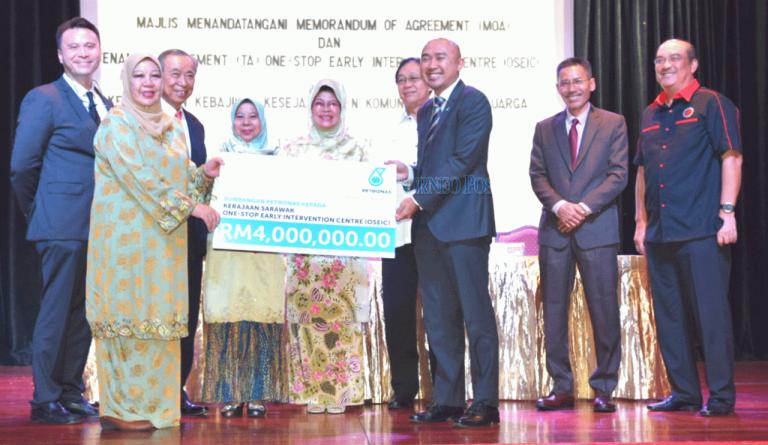 Zulaihi (third right) hands over a mock cheque to the ministry's permanent secretary Dr Saadiah Abdul Samat, witnessed by Fatimah (back row, centre) who is flanked by Harden and Rosey. — Photo by Roystein Emmor

KUCHING: Petroliam Nasional Bhd (Petronas) has handed over RM4 million to the Sarawak government to develop the first One-Stop Early Intervention Centre (OSEIC) in the state.

The contribution was handed over by Petronas Sarawak general manager Zulaihi Mantali to the Ministry of Welfare, Community Well Being, Women, Family and Childhood Development, which was represented by its minister Dato Sri Fatimah Abdullah, after a memorandum of agreement and tenancy agreement signing ceremony here yesterday.

According to Zulaihi, Petronas has been looking for avenues for its corporate social responsibility (CSR) programme that would leave a large and long-lasting impact.

“We find that the establishment of the OSEIC is the best approach for us. We hope that with this centre, many Sarawakians, specifically the needy community, could benefit from it.

“While this contribution is not much, we at Petronas decide to start here (the OSEIC) and now we can fully realise the OSEIC's establishment," Zulaihi told reporters here.

The OSEIC would serve as a one-stop centre for children with special needs, such as those with autism spectrum disorder, Down's syndrome and learning disabilities.

It would have facilities such as diagnosis, early intervention, rehabilitation, a pre-school, a play area and a therapy centre.

Set to be sited at Metrocity at Jalan Matang here, the centre is expected to be up and running by June this year.

Meanwhile, a press statement from Petronas said that the national oil giant had invested RM2.75 million to construct new pre-school buildings for the Penan children, under the Penan Children's Community Education Programme.

The buildings are being constructed in Long Kerangan, Long Ba Selulong, Long Jenalong, Long Kawa and Long Leng in the Apoh-Tutoh area in Baram District.

Petronas had also contributed RM7 million to the Sarawak government for the construction of a new dialysis centre in Kuching.