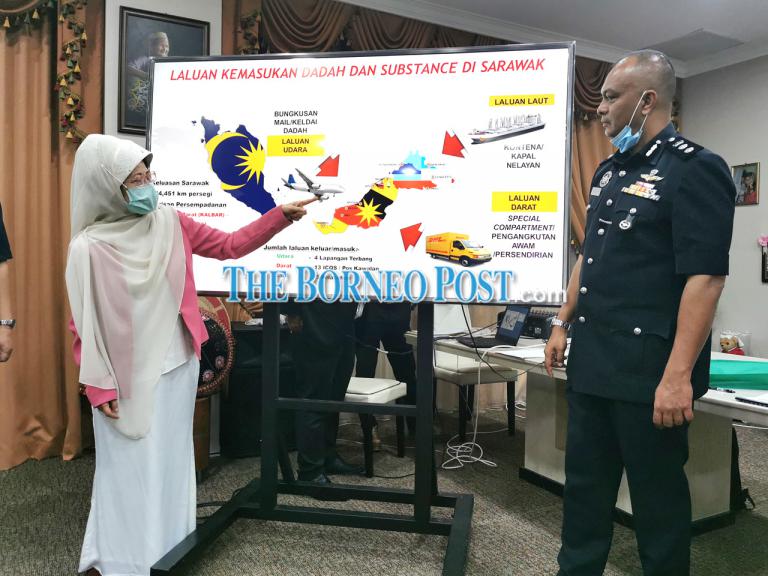 Fatimah (left) and Jasmirol showing the routes smugglers use to bring drugs into Sarawak. — Photo by Roy Emmor

KUCHING: The State Cabinet has agreed to let the State Security Council take over the management of drug and substance abuse from the Ministry of Welfare, Community Wellbeing, Women, Family and Childhood Development.

This is because the problem has become a threat to the state's security, said Welfare, Community Wellbeing, Women, Family and Childhood Development Minister Dato Sri Fatimah Abdullah.

“Students are involved in drugs and substance abuse and it is posing a threat to the state's security, so fighting the problem will be under the council, chaired by the chief minister and our ministry will manage in terms of administration," she told a press conference at her office yesterday.

“A committee consisting of the police, Customs Department, National Anti-Drug Agency (AADK), Education Ministry and Health Ministry will give a monthly integrated report on the drug and substance abuse in the state."

Fatimah pointed out Sarawak is a vast state and drug traffickers can use many routes by land, air and sea to smuggle and distribute drugs in the state.

As such, among the challenges faced in combating drugs abuse in the state is the need for more sophisticated equipment and logistics support and the State Security Council is in a better position to acquire the funds to procure these equipment, vehicles, boats and even planes.

Fatimah said as of June this year 5,077 people had been arrested for drugs and substance abuse compared to 8,506 for the whole of 2019.

“The highest number of those arrested was the unemployed with 5,018 or 98.9 per cent, followed by those who were employed or had some occupation with 21 arrests and students with 19 arrests," she said.

As of June this year, the number of people under surveillance increased to 1,784 people compared to 1,670 for the whole of last year, she said.

“I urge the public to play their role in helping the government to actively combat drug abuse in their own community by channelling information to the enforcement agencies via the police Narcotics Crime Investigation Department (NCID) hotline at 012-2087222, AADK hotline at 019-6262233 or 03-89112233," Fatimah said.

First homeless temporary centre in Sibu by year-end
23d ago
Ministry hands over drug abuse fight to State Security...
23d ago
Help for unlicensed traders to register
28d ago
One-year free rental of business address to SMEs
28d ago
Ministry prepares consolidated form to speed up registration of...
28d ago
Ministry of National Unity planning to adopt Unifor concept...
28d ago
Policies, programmes, gov’t budgets need to be realigned in...
1 month ago
KGC applicants to get their cards soon
1 month ago
Fatimah hopes to see end to stateless issue
1 month ago