‘Look out for school bullies’ 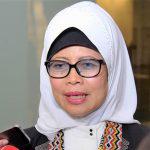 KUCHING: A policy of zero bullying should be enforced to achieve a crime-free level in schools.

Welfare, Community Well-Being, Women, Family and Childhood Development Minister Datuk Seri Fatimah Abdullah said this in response to a recent case of three Form 1 students who were bullied by a group of 11 senior students in a local school dormitory.

She stressed that bullying is an unacceptable act as it could cause fear, trauma, anxiety, stress and will leave a long-term effect on the victim.

“Thus, a policy of zero bullying should be in place.

“Everybody including principals, teachers, wardens and hostel prefects should be on alert especially at the beginning of the new school term,” she told New Sarawak Tribune yesterday.

She also mentioned that appropriate action should be taken against the wrongdoers to send a message to the masses that bullying is unacceptable.

The incident happened on Jan 19 at 1am when the first victim (out of the three Form 1 students) was called to a room by his senior students.

The group of 11 had forced the victim to fight one-on-one with one of them, to which the victim refused. This led the bullies to punch the victim at his arms, hips and buttocks as well as perform a headlock on the victim which caused him to suffer from breathing difficulty.