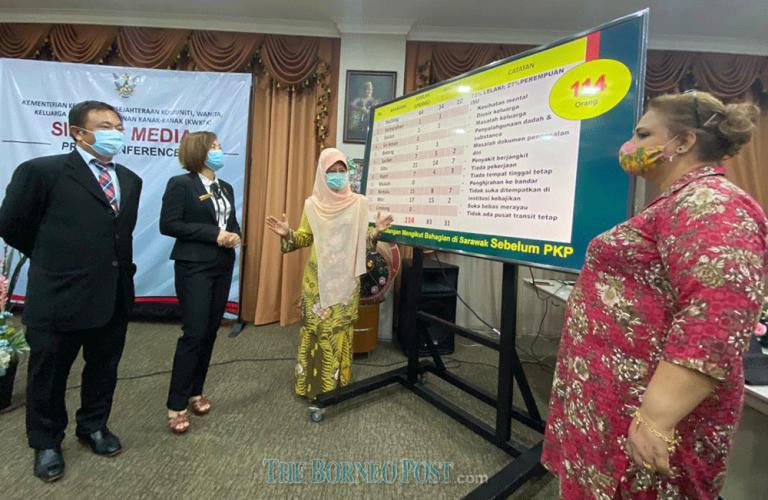 Fatimah (third left) shows statistics on the homeless at the press conference. Also seen are (from left) Tan, Chong and Manjeet.

KUCHING: The first homeless temporary settlement centre to be set up in the State at Sibu will start operating by end of this year.

Minister of Welfare, Community Well Being, Women, Family and Childhood Development Dato Sri Fatimah Abdullah said the building for the centre has been identified. As it is an old building, it needs to be renovated.

“We have suggested several temporary settlement centres to be set up in four main cities and towns – Kuching, Sibu, Miri and Bintulu but only the building in Sibu has been identified as suitable," she told a press conference after chairing a co-ordination meeting for the setting up of Safe Haven or Transit for the Homeless here yesterday.

Fatimah added that fund for repair is needed and she will submit the proposal to the cabinet at the next meeting.

“We have asked the relevant parties to list the costs before I submit the proposal. Once we get the allocation, it may take three to four months for repair works to be completed before we can bring in the homeless in Sibu," she said.

She explained that the centre will have an open concept where the homeless can come and go, aside from providing basic facilities like bathrooms, kitchens, toilets as well as health centre. It will also provide counseling and job search services so the homeless can be gainfully employed.

These centres would be managed by a non-governmental organisation (NGO) anchor and Sibu centre will be managed by Shan Xin Charity Group Sibu Branch.

“In other places, we are still in the process of identifying places. In Kuching we are seeking the help of Kuching North City Commission (DBKU) and Kuching South City Council (MBKS) to find a suitable place."

She elaborated that Pertubuhan Pembangunan Insan Sarawak (Perkepins) and Federation of Chinese Association (FCA) expressed interest to be the anchor NGOs in Kuching.

Fatimah said the ministry is targeting for the homeless to get jobs within two months of living at the centres.

First homeless temporary centre in Sibu by year-end
23d ago
Ministry hands over drug abuse fight to State Security...
23d ago
Help for unlicensed traders to register
28d ago
One-year free rental of business address to SMEs
28d ago
Ministry prepares consolidated form to speed up registration of...
28d ago
Ministry of National Unity planning to adopt Unifor concept...
28d ago
Policies, programmes, gov’t budgets need to be realigned in...
1 month ago
KGC applicants to get their cards soon
1 month ago
Fatimah hopes to see end to stateless issue
1 month ago