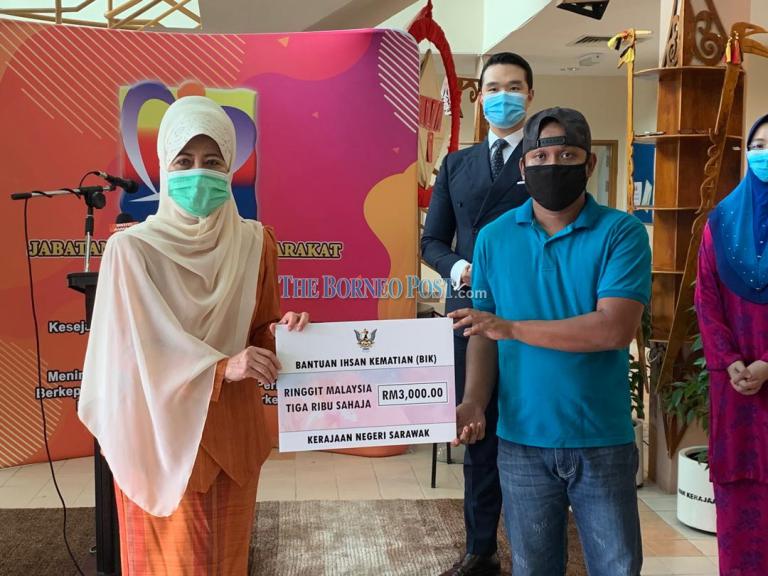 Fatimah (left) handing over the mock cheque for BIK assistance to Rizam (right). Also seen in the background is Sam Wong.

The Minister of Welfare, Community Wellbeing, Women, Family and Childhood Development said that some of the applications received were found to contain problematic data.

“So far, as of May 18, we have received a total of 146,876 applications and from that total, as many as 39,868 applications have been forwarded to Socoe Sdn Bhd for processing. We also received 53 applications for BIK.

“However, we found that 16,415 applications had problematic data. For example, (the applications had) incomplete mandatory details or incomplete next-of-kin details that are important for the Death Compassionate Assistance," Fatimah said today at a KGC and BIK symbolic handing-over ceremony at Wisma Kebajikan here.

She noted that as many as 56 vendors, private companies and government agencies had come on board as KGC strategic partners to offer discounts and rebates to card holders.

The special assistance programme was officially launched on Mar 9, which allows senior citizens in the state to enjoy special privileges and discounts on health services (pharmaceutical and recovery); public transportation; essentials such as groceries, clothes, shoes, optical services; self-care such as reflexology, massage, spa treatment, manicures, pedicures or hair-styling; and recreational or theme parks.

She also handed over the RM3,000 BIK assistance to Rizam Rohiman, the next-of-kin of KGC holder Rohiman Sawio, who had passed away on Mar 10 from a heart attack.