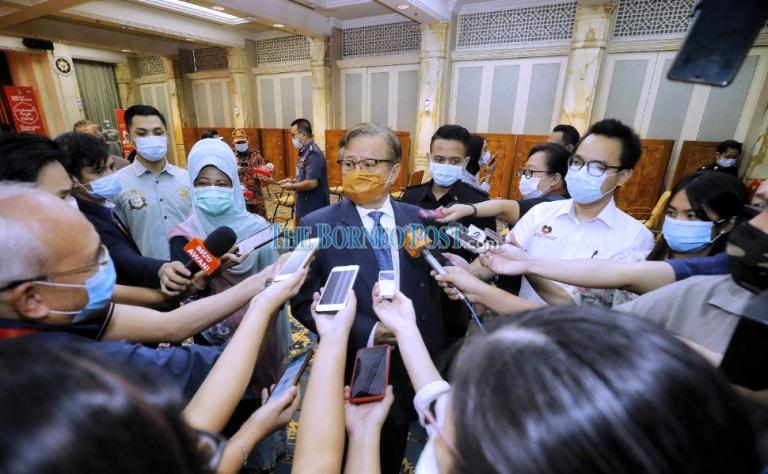 Abang Johari (centre) speaking to the press at Wisma Bapa Malaysia. Photo by Chimon Upon

KUCHING: A 'new arrangement' is in the midst of being worked out with regards to Sarawak's petroleum resources, said Chief Minister Datuk Patinggi Abang Johari Tun Openg.

“We recognised that Petroleum Development Act (PDA 1974) applies nationwide but in Sarawak itself, we also have Oil Mining Ordinance 1958," he stressed after handling out goodies to frontliners in view of the coming Hari Raya Aidilfitri and Gawai celebrations at Wisma Bapa Malaysia here today.

Abang Johari said this when asked to comment on the criticisms regarding the state's settlement with Petroleum Nasional Berhad (Petronas) over RM2 billion owed by the latter in relation to the five per cent State Sales Tax (SST) imposed on petroleum products for the year 2019.

“(Nonetheless), there is a new arrangement being negotiated and the negotiation will have to go through the state legislative assembly consultative committee," he said.

Abang Johari reminded that a High Court's decision to dismiss Petronas' judicial review application against the imposition of SST by the state government on petroleum products showed that Sarawak has the right to impose such tax.

In a joint statement by the state government and Petronas on May 8, it stated both parties were dropping their legal suits against each other after the settlement was reached and the state had agreed to reduce the SST rate imposed on the corporation from the current five per cent in phases.

It was also pointed out previous agreements between the two parties made under PDA 1974 were still valid and enforceable and the oil giant is still recognised as having full ownership and control over the national oil and gas development, in line with the federal constitution.

Meanwhile, Petronas via its subsidiary companies, said it will make full payment of the five per cent SST imposed on petroleum products amounting to RM2 billion for the year 2019 to the state.