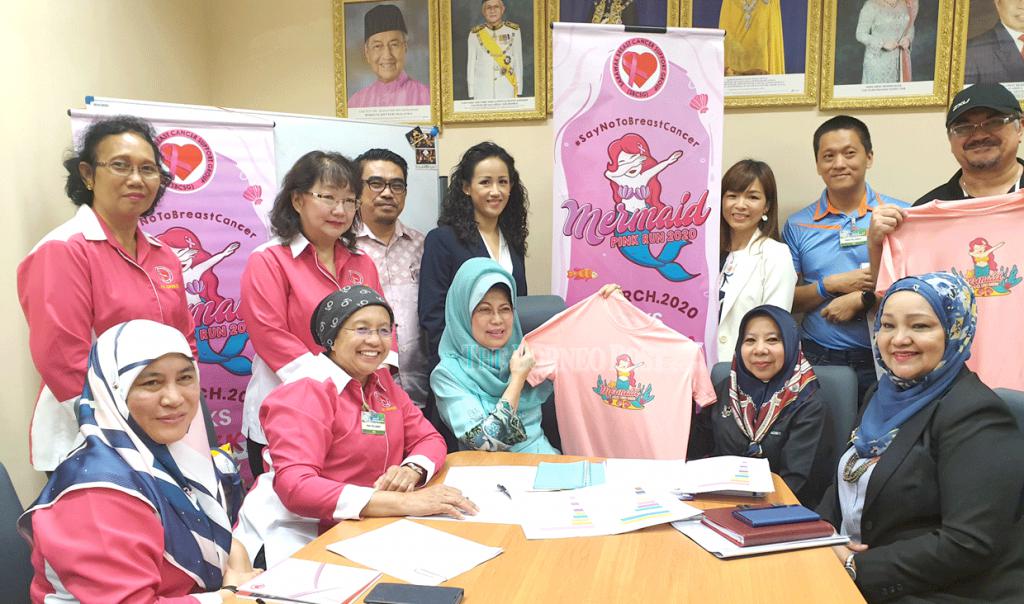 Fatimah (seated centre) and Rosey (second right) join officials from the ministry, SBCSG and also members of Mermaid Pink Run 2020 organising committee in a photo-call at her office.

KUCHING: The Sarawak Breast Cancer Support Group (SBCSG) is organising a charity run this year, which will be held in two parts.

The 'Mermaid Pink Run 2020' is not only meant to raise public awareness of breast cancer, but also to celebrate SBCSG's 20th anniversary.

Speaking after a meeting on the charity event at her office here yesterday, Welfare, Community Wellbeing, Women, Family and Childhood Development Minister Dato Sri Fatimah Abdullah said the run would hold two categories – the 3km (Families) and the 6km events.

“The Mermaid Pink Run 2020 will also be held twice – the first run will be flagged off at Kuching South City Council (MBKS) compound this March 29, while the second one will be at Miri Times Square on April 19,” she told reporters here.

The event under the tagline #SayNoToBreastCancer also serves as a platform to raise more funds for SBCSG's activities.

Online registration can be done via http://www.malaysiarunner.com, while for manual registration, the applicants can head to Revrun Green Height Mall, Sarawak Breast Cancer Association premises at Jalan Maxwell and Krista Kindergartens to sign up.

Registration fees are RM50 per person (individual runner), and RM45 per person per group of four runners.

Deadline for registration is Feb 28. Each registered participant will receive a running tee and a specially designed finisher's medal. Commenting on SBCSG, Fatimah said the group had always been active in its activities over the years and thus, it deserved all the support that it could get.

“The SBCSG have been running numerous health screenings, talks and motivational activities,” said the minister, who is also patron of SBCSG.

Fatimah also said through the group's findings, it found that among all types of common cancers, breast cancer stood as the No 1 killer of women in Sarawak, while cervical cancer placed second.

“Thus, I think it is important to raise greater public awareness of the importance of early detection of breast and cervical cancers because with early detection and treatment, lives can be saved.”