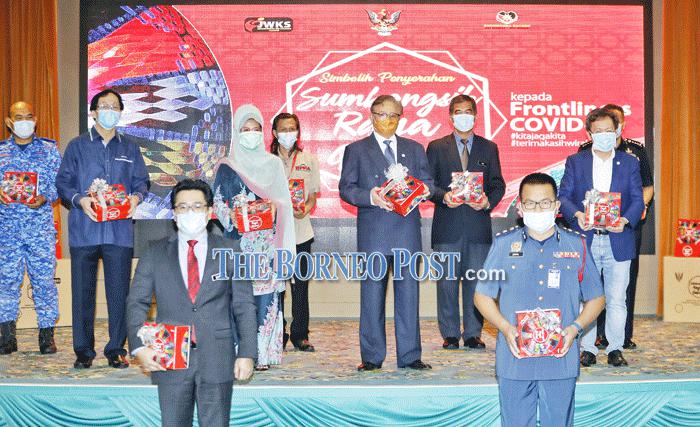 Abang Johari (on stage, front second right) in a photo call with Fatimah on his right, Dr Sim (right), Harden (left) and others during the presentation of the food packages. — Photo by Chimon Upon

KUCHING: The Sarawak government has prepared 10,500 food packages for distribution to Covid-19 frontliners during the Hari Raya and Gawai celebrations.

Welfare, Community Well Being, Women, Family and Childhood Development Minister Dato Sri Fatimah Abdullah said the distribution is as a token of appreciation to frontliners tackling the outbreak in the state.

“My ministry together with the Women and Family Department contributed a total of RM315,000 to prepare 10,500 food packages for the frontliners.

“Breaking with tradition, the food packages will be delivered to each divisional disaster management committee chairperson (for distribution) instead of the respective agency heads," she said during a ceremony at Wisma Bapa Malaysia here yesterday.

Meanwhile, Chief Minister Datuk Patinggi Abang Johari Tun Openg, who was present at the ceremony, said the Covid-19 outbreak in the state meant that 'adjustments' needed to be made in celebrating Hari Raya and Gawai this year.

“Until a vaccine has been found, people will need to adjust to this 'new normal' of living such as wearing face masks, social distancing and no mass gatherings," he said.

He also said the state government will this month pay out the RM500 bonus which had been promised to federal civil servants in December last year.